Each year, property owners in the City of Lancaster are responsible for approximately 750 million gallons of polluted water flowing into the Conestoga River and eventually into the Chesapeake Bay.

When it rains in Lancaster City, it falls on rooftops, streets, sidewalks and parking lots and then flows into the combined sewer system. Along the way, it picks up all kinds of pollutants from sidewalks, parking lots and streets like pet waste, trash, fertilizers and pesticides, oil and automotive fluids. 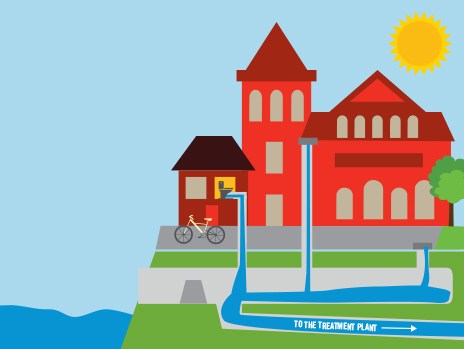 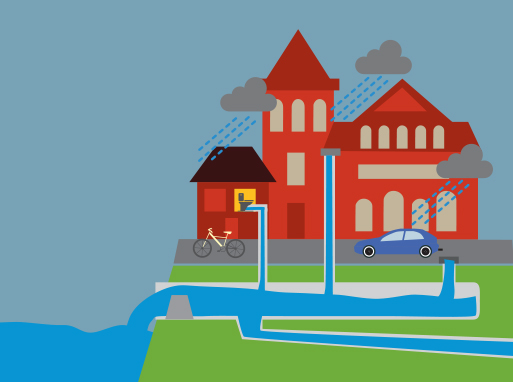 Why is stormwater pollution a problem?

Most of Lancaster’s sewage and rainwater flow into one system called a Combined Sewer System (CSS). During rain events the CSS can be overwhelmed with the flow of sewage and rainwater creating a Combined Sewer Overflow (CSO), which discharges stormwater mixed with sewage directly into local rivers. These polluted overflows impact downstream water quality. Many cities, including Lancaster, are required by law to reduce the frequency and volume of these events.

In parts of Lancaster without a CSO, stormwater is often discharged directly into our surrounding creeks and rivers untreated. All stormwater pollution, regardless of its source, is harmful to fish and other aquatic life and habitats, and can make recreational areas unsafe and unpleasant. The impacts stretch from the Conestoga River and Little Conestoga River all the way to the the Chesapeake Bay.

What is the city doing about this problem?

The City of Lancaster is solving their stormwater problem through the implementation of a 25 year green infrastructure plan. The plan’s mission is to provide more livable, sustainable neighborhoods for City residents and reduce the combined sewer overflows and nutrient loads.

The City of Lancaster is doing two things:

Gray infrastructure is a human-made system essential in every community that includes sewer and wastewater facilities.  These systems generally require energy to operate and are often quite expensive to build and maintain over time.

Green infrastructure, in contrast, employs natural systems to manage rainwater where it falls, allowing water to soak into the ground, evaporate into the air or collect in a rain barrel or cistern thereby using natural systems (such as the ground) to essentially treat rainwater instead of more expensive gray systems.  There are many types of green infrastructure technologies including trees, native shrubs, green roofs, rain gardens, porous pavement, rain barrels and cisterns.

In 2014, Lancaster City won the prestigious Best Urban BMP in the Bay award for the Plum and Walnut Green Intersection Project. Green infrastructure transformed low lying intersection with a large concrete island and dangerous merge lane into a model for stormwater management, improved traffic safety, and increased commercial activity. Located next to the Lancaster Brewing Company, the intersection is now home to native shrubs, perennials, and new tree species surrounding an outdoor cafe constructed of permeable pavers, featuring a public art amenity that acts as a cistern to capture stormwater from the brewery’s roof for watering planters that are used by the brewery’s owners to grow their produce.

What is the stormwater fee?

A small fee was enacted in 2014 that is based on the amount of hard surfaces and rooftops from each property that actually generate stormwater runoff. The fee is being placed into a dedicated fund used only for the stormwater management program; the improvement and maintenance of existing systems and additional new green infrastructure. Rebates and credits are available to property owners who increase the amount of water captured on their properties through green infrastructure.